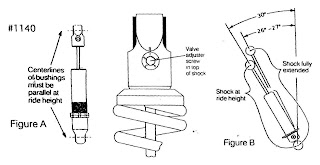 The worst thing for a suspension shock absorber is incorrect installation. Misalignment of the upper and lower bushings will cause excessive wear of the bushing and if misalignment is extreme, permanent damage or breakage of the shock may result. It is therefore very important that the centerlines of the bushings be parallel to each other when the shock is at ride height (figure A). This is determined by the position of the mounting brackets.

Proper ride and handling characteristics are determined by the angle that the shock is mounted at. The more vertical the shock, the stiffer the ride. The less vertical, the softer the ride, but also less support during hard bumps and cornering. The recommended angle is 30-degrees from true vertical at ride height. 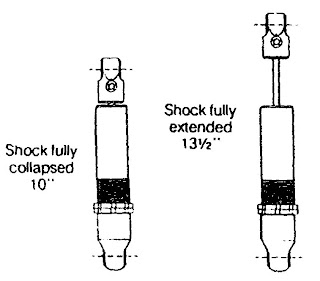 Generally speaking the weight of the car will collapse the shock about 1-114” to 1-112” at ride height. Using this rule of thumb you will have a 30-degree angle at ride height if the shock is mounted at approximately 26 to 27 degrees with the shock fully extended (figure B).

A five position damping adjuster lets you dial-in the ride you desire. The valving is a six stage automatic damping function that adjusts to continue load and velocity factors to provide proper damping under all conditions. Rotating the adjuster clockwise stiffens the damping effect. One being the softest and five being stiffest, on the dial face.

Posted by SRPM No comments:

1. After removing the original front or install the fenders and position the ride height and rake of the chassis. Place the wheel tire into the fender opening and block it position for the best appearance.

2. With the wheels and tires into position, extend a chalk line (e.g., twine, heavy string) from the wheel center to the wheel center and beneath the vehicles frame mils. Using a plumb bob, hang off the top of the frame rails and mark.
Posted by SRPM No comments:

These mounts are first bolted to your engine with the proper hardware. I would recommend using lock nuts instead of compression style washers.

Then allowing at least an inch clearance between the floor and the bell housing level the engine with the intake manifold installed on the engine this is your leveling surface. Once the engine is level front to back, then level it left to right.

Placing a small jack under the pan is an easy way to accomplish this. Make sure that you now have an equal distance on each side of the engine and the vehicle frame.

Take a piece of cardboard or heavy paper and cut it out to the same shape as the rectangular tube mounts (these have the bushings installed ) and come in the kit. Trace the tube unit and using the template make a hole in the center of the cardboard where the attaching bolt goes through the fixed portion of the engine mount.

Now you can use the template to give you the correct angle to cut the 1 X 3 tubes to the frame. This is done by bending the cardboard at the angle that the frame forms with the template attached with the ½ inch bolt going through the center at the bushing end.

Once you get this angle cut the rectangular tube at the angle taken from the template.
Install the cut rectangular tube to the fixed part of the engine mount. Make sure everything is still level and tack the mounts to the frame. If you now need to check other clearances you can leave the mounts tacked until you are ready for the final installation.

Ride Height: Is the height of your car when it is sitting and the suspension is at the optimum setting (location). I can not stress how important setting ride height is on a chassis.

First, you need to pick out the wheels and tires you will be using in the front and in the rear. The diameter of the tire determines the ground clearance, frame angle, engine angle, shock length and correct angle to weld the front suspension.

No chassis builder can build a chassis that is tuned with optimum suspension without knowing proper "ride height". How did he know your "ride height" without asking you what wheels and tires you are going to use? Maybe he does not want to know so when your car does not handle correctly he can sell you some additional parts. Remember to ask a salesperson these questions when you are buying. Do they sound credible or just out to make a buck?

Now you are ready to set the engine and pinion angle.

If you have any questions regarding the information on this page please feel free to contact me at moonmr@hotrodheaven.com or 888-875-6666.

Copyright reserved by Dean Oshiro. Reproduction without written approval is a violation of Copyright Laws. Sept 2000
Posted by SRPM No comments:

Most engines are set at 3 degrees, when you look at the side of the intake manifold on a carburetor engine you will notice the manifold has a wedge in it. This wedge is to allow the carburetor to sit level. The main purpose of having an engine angle is to allow for more room in the passenger compartment by having a smaller tunnel. That is why the car manufacturers build front engine cars with the engine at an angle. Drag race cars have a 2 to 3 degree negative engine angle, the engine will tip down in front. Having this negative angle allow for better weight transfer to the rear of the chassis. The 3 degrees you keep hearing about is the recommended angle for carburetor cars with intake manifolds set at 3 degrees. With the engine and pinion set at 3 degrees they do not line up directly and requires you to make them parallel. This misalignment allow the u-joints to rotate on a street car.

There is a misconception regarding the pinion angle on drag cars. I have seen many people advise that the pinion needs to be 2 - 7 degrees down. In relation to what? I disagree with this theory and set-up. The pinion needs to be "parallel" to the engine angle or in a straight line for the least amount of horse power lost.

This following is a quote from Mark William's web site, "There is a general misunderstanding bout "dropping the pinion down" several degrees. This is a practice that could be applied only to leaf spring cars without any traction control devices where springs can “wrap” and change pinion angle. This practice would not apply to 4-link, ladder bar or torque arm equipped cars. Failure to maintain matched and minimum operating angles increase erratic non-uniform output velocity from the drive shaft to the differential."

You can set up the engine angle at almost any degree just as long as the transmission is perfectly inline with the pinion yoke. However, when the engine and pinion yoke is in direct line, it does not allow for the rotation of the u-joints. This straight alignment is mostly used on drag race cars.

If you would crawl under your car and look at the pinion angle you will notice it is the same angle as the engine/transmission (they are parallel). A good example of having negative engine/pinion angle is when you lower a 1 ton crew cab where you lower the front more than the rear and there is quite a "rake". In this case you have to put a wedge on the back side of the saddles to tip the pinion angle down.

If you are building a chassis you need to first determine ride height. This is the most important thing you need to do. Decide what wheels and tires you want to use before you pick up the welder. If a chassis builder or a salesman does not ask you what tires you are going to use do not buy from him. How can he build your chassis without know the tire diameters? How can he set up the front end and engine angle? What they do is build a chassis based on what they want or think you should have and not what you want.

Now determine the ground clearance you want for your oil pan. Set your motor mounts based on this and the angle to best fits your car. Try to set the transmission directly inline with pinion yoke and if that is not possible set the pinion parallel to the engine angle. Before you weld the brackets on the rear end housing be sure that the rear end was set at "ride height" ride height is where the rear end would be with the car done.

If you find a chassis builder or salesman that says you have to have the engine angle at 3 degrees and there is no other angle you can set if at, find another chassis. He apparently does not understand the principles of setting correct engine and pinion angle. Also no chassis builder can build you a chassis with optimum suspension without knowing proper "ride height".
Posted by SRPM No comments: